Renowned award winning international artist Mike Payne is best known as the creator of ranges and concepts of hugely successful characters and licensed merchandise known across the world.

After 26 years in the civil service, Mike Payne broke free and became a renowned international award-winning cartoonist and illustrator. Mike is now one of the UK’s leading and most respected experts in the world of commercial humour, greeting card design, books and gift concept development. Images and creations from the many characters he has created have an immediate and instinctive appeal. It is estimated that greetings cards featuring his creations have sold in excess of ten hundred million worldwide.

Mike was asked to create a bear with a great depth of feeling for the then newly formed company Carte Blanche in 1987, and working under his pen name of “Miranda”, Mike created a phenomenon.

Mike’s ‘Tatty Teddy’ character for the ‘Me to You’ concept (the charcoal bear with the blue nose), together with other unique creations, have won numerous awards in the USA, Europe, Scandinavia, Australia, New Zealand, South Africa and, of course, the UK. Mike has travelled the world doing many “signings” and after seventeen years of drawing the teddy bear, in 2004, decided the time was right to move on to pastures new. 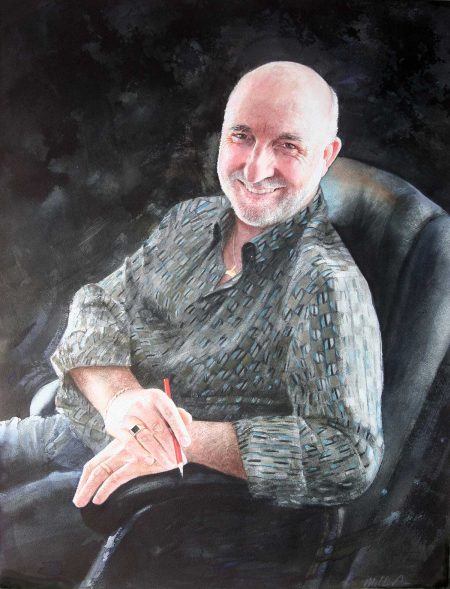 Charlie’s Ark is yet another concept Mike has created and there are plans to put this onto global children’s television worldwide.

Mike is currently working on a range of varied PopArt which is proving incredibly popular as well as a very exciting new graphic range of his new concept GraphicJungle.

A lecturer at schools and colleges, with many TV appearances to his name and a passion for professional acting, Mike is a sought after and original public speaker. His time as Sky News cartoonist was the perfect environment to entertain and promote the art of cartooning, for which he is globally renowned.

This website uses cookies to improve your experience while you navigate through the website. Out of these, the cookies that are categorized as necessary are stored on your browser as they are essential for the working of basic functionalities of the website. We also use third-party cookies that help us analyze and understand how you use this website. These cookies will be stored in your browser only with your consent. You also have the option to opt-out of these cookies. But opting out of some of these cookies may affect your browsing experience.
Necessary Always Enabled
Necessary cookies are absolutely essential for the website to function properly. This category only includes cookies that ensures basic functionalities and security features of the website. These cookies do not store any personal information.
Non-necessary
Any cookies that may not be particularly necessary for the website to function and is used specifically to collect user personal data via analytics, ads, other embedded contents are termed as non-necessary cookies. It is mandatory to procure user consent prior to running these cookies on your website.
SAVE & ACCEPT
Menu